With this Taxpayer, there is really no issue with the procedures in place to pay sales and use taxes on their real property construction jobs.  The Stratified Statistical Sample file for the VA audit had over 25,471 lines in it with a dollar value of $39,343,230.43.  The sample itself only had 1,190 invoices in it but represented 61.2% of the dollars.  For the top two dollar value ranges in the sample, VA reviewed 100% of the invoices and if any of those invoices had been in the normal block sample audit with no tax being paid, the assessment would have been a lot higher than the Sample assessment of $31,147.41.

Unfortunately, states love to audit real property contractors.  Real property contractors are considered consuming Taxpayers and owe tax on all the materials incorporated into their jobs and these Taxpayers have been audited so much it has become second nature for some of them to pay use tax on transactions where sales tax is not charged.  This is the case with this Taxpayer.  After a while, the Taxpayer needs to push back and that what happens when a Taxpayer hires Marsu to assist them with an audit.  Not only will Marsu assist the Taxpayer in lowering the assessment to the lowest amount possible, Marsu will document all refunds that the Taxpayer has inadvertently overpaid.  Plus I have seen it where Taxpayers who have been audited on a regular basis in the past have had that trend stop after Marsu has gotten involved with the audit to reduce the tax assessed and has filed an offsetting refund with the State Agency involved.  In this case, the Taxpayer only owed a net of $15,860.19 after the refund and the auditor spent hundreds of hours doing the review with results that on an hourly basis were very below average.  In some cases, the Taxpayer actually got a refund back from the State performing the audit.  In this case, the State is really a loser.

For this audit, the Taxpayer actually made money.  Marsu had DC, MD and VA refunds approved in the amount of $113,972.98 minus the VA audit of $31,147.41 for a profit of $82,825.57.  Marsu did not have a lot of time invested in the VA audit review.  Marsu mainly advised the Taxpayer on the Stratified Statistical Sample audit methodology and reviewed only 34 invoices.  So for this three-year audit, the Taxpayer saved an average of $27,608 per year and if the Taxpayer instituted all changes, the Taxpayer has saved $220,864 over the past eight years. 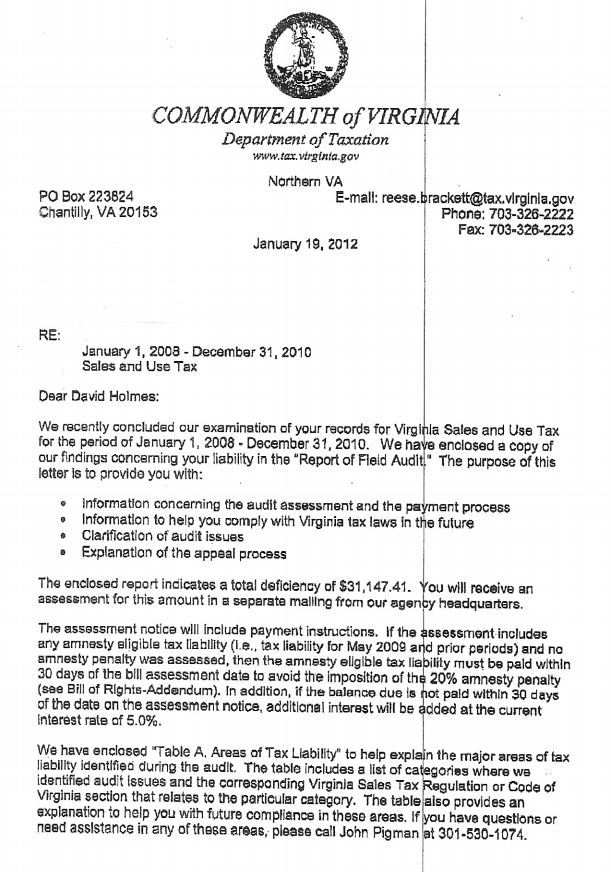