Virginia countertop manufacturer and installer was selected by the VA Department of Taxation for a Virginia sales and use tax audit.  This was the first-time audit for this Taxpayer.  Marsu was contacted by the owner of the business because the Taxpayer had just received workpapers stating that they owed $150,065.52 in sales and use taxes.  Marsu immediately contacted the auditor and was able to start the review process in the field with the field auditor and supervisor which is a lot easier than having to request an informal hearing and having to explain everything all over again to a hearing officer.  The auditor had reviewed a sample period for sales and expenses and projected the assessment over the audit period and reviewed all assets purchased during the audit period.  Marsu did the following for each schedule in the audit:

In VA, the sales tax laws regarding manufacturers/contractors/retailers are different than in DC and MD and is discussed in detail in VA Administrative Code 10-210-410(G).  In VA, a Taxpayer who is installing fences, venetian blinds, window shades, awnings, storm windows and doors, floor coverings, cabinets, kitchen equipment, window air conditioning units or other like or comparable items is considered a retailer and should collect tax on the sale if the Taxpayer meets the following three conditions:

I am not exactly sure what happened during the auditor’s original examination of the Taxpayer’s business in determining if the Taxpayer was a consuming contractor or a manufacturer/retailer.  For whatever reason, VA believed that the Taxpayer did not carry an inventory of granite or marble slabs and therefore did not meet the three-part test of being a retailer and was deemed a consuming contractor.  I am chalking this error up to a miscommunication between the Taxpayer and auditor.  I am guessing that the auditor did not explain the three-part test to the Taxpayer, so the Taxpayer did not know the importance of their answers regarding this issue.  Regardless of what happened, the key point here is that we were able to straighten it out and the Taxpayer’s assessment was corrected in this area.  I thought it was sad though that the Commonwealth of Virginia was trying to get the tax from both ends of the transaction.  First from paying the tax on the materials when purchased and then from collecting the sales tax from the customer.  If the Commonwealth thought that the Taxpayer was a consuming contractor, then I would have thought the Commonwealth would have just been happy in getting the tax on sales price vs. the cost of the materials and not try to assess tax on the COGS when the Taxpayer had already collected the tax from their customers.

Second issue is that by law sales tax is to be remitted as billed and not as collected.  I know this creates a cash flow issue, but that is the law.

The key issue with dealing with any type of auditor is communication.  Marsu believes in knowing the answer before the question is asked and if Marsu does not know the answer, then Marsu has the ability to say I am not sure, and I will get back to you with the answer.  The problem here is that the Taxpayer should know everything about their business, but does the Taxpayer know how to properly answer the questions for sales tax purposes?  Probably not.  When the audit starts, the auditor will have some preconceived ideas of what the Taxpayer should be collecting tax on, if any, and what the Taxpayer should be paying sales and use tax on.  These preconceived ideas will probably come from the auditor’s experience of auditing other like Taxpayers or viewing the Taxpayer’s website.  In the first meeting with the auditor, the auditor will usually discuss the Taxpayer’s business to exactly find out what the business does.  The auditor will be asking targeted questions that deals with collecting tax vs paying sales and use tax on materials purchased for the business.  The auditor will be clinging to every word that the Taxpayer says, and their preconceived ideas can change with whatever you tell them.  This includes miscommunication to when the auditor improperly interprets what was said or the lack of what was said.  If Marsu is involved before the audit starts, then the information for sales and use tax purposes can be effectively communicated to the auditor and hopefully no improper interpretations will be made.

Effective July 1, 2017, VA reversed their 2010 law change regarding countertop manufacturers/installers and deemed them to be consuming contractors again.  Therefore, these Taxpayers pay tax on their materials incorporated into the job and collect no tax when the job is installed. 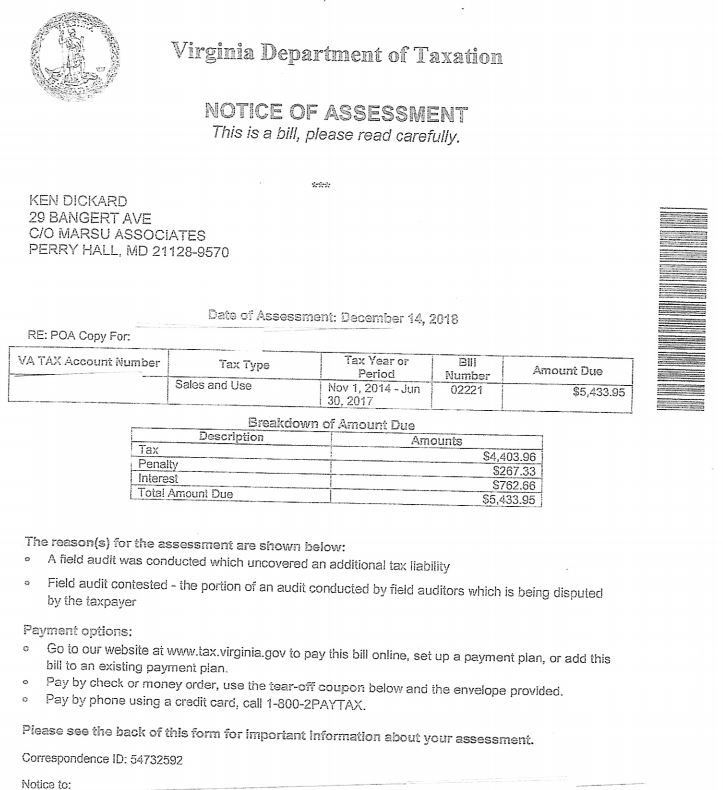